An experiment in yoga #1 – ahimsa and sauca

[I wrote previously that, as part of our YTT course, we’ve been asked to study an area of Patanjali’s Yoga Sutras and report back to the group. I decided on an experiment in living his yamas and niyamas (abstinences and observances – the building blocks of his yoga) and so here I am, taking on one of each every five days from the end of March to the beginning of May.]

Up first are ahimsa and sauca but before we get started let me highlight one thing – the speed with which I’ve discovered five days is nowhere near enough time to get to grips with these new life rules! (Plus the way I have zero idea of how I’ll distil all of this into the required 1,500 word essay at the end…)

But then I think I always knew that would be the case. And although there’s certainly been no mastery these last five days, there have been gains in understanding with regards how to apply them. Which seems to fit well with one particular statement in the book’s preface:

“Let us slowly try to understand more and what little we understand, let us try to practice.”
-Swami Satchidananda (the translator of my edition of the Sutras)

Literally speaking, ahimsa can be translated as the absence (“a-“) of causing pain (“-himsa”) although it can also be interpreted as kindness, consideration and thoughtfulness too.

Now, as you may already know if you’re a regular reader, I’m pretty much the queen of being kind and considerate to others but often the very worst at applying this same treatment to myself. It is something that I’ve been consciously working on for some time though, so I’ll admit to thinking that this yama wasn’t a bad place to be starting out…

And in some ways that turned out to be true. I (mostly) successfully navigated the first wedding I’ve been to since my own divorce with very little negative self-talk, and I aced cooking dinner for my Dad and his partner – even when he disappeared off to ‘read the paper’ (aka have a nap) for the first couple of hours that I was in the house! I’ve refused to engage in gossipy conversations, instead actively trying to stop them in their tracks, and even as work has become a little overwhelming I’ve maintained this ‘ahimsic’ mindset…that is until a PR cold caller interrupted a particularly busy day with a very poorly executed pitch! Essentially though I’ve been living life with the minimum of trauma – both for myself and others.

I’ve also integrated the principles of ahimsa into my asana and teaching practices – not punishing myself when my hips simply wouldn’t comply in a particular sequence of triangle pose last Tuesday, and making a point of educating my students in not pushing themselves past their ‘edge’.

In sum then, it’s been largely achievable this week for me to recognise the appearance of any negative, violent or harmful thoughts and send them on their way. But has the result been that “all enmity ceases in [my] presence” as Swami Satchidananda suggests? Not quite, but it has helped defuse a number of tricky situations – at work and at home.

There’s been just one hiccup (isn’t there always?!)…

For a lot of the week I’ve found myself feeling quite sad and withdrawn, and it has been difficult not to beat myself up about it. As for why, I have a couple of theories: number one it’s because this week coincides with my period (although sadness is not normally my MO); number two, it’s fallout from the emotional shift I experienced at the last training weekend; or, number three, bringing my attention firmly back to my regard for both others and myself this week has highlighted quite how awful I (and others!) have been to me in the recent past, churning up lots of old pain.

In reality it’s probably a combination and, as I write this, I come to realise that actually any time someone has shown me compassion this week, it’s almost brought me to tears. It’s like I’ve been stripped of my armour, and am raw like an open wound. Everything I feel, I feel more than usual (and let’s be fair that’s a lot under normal circumstances!).

So really, there have been a LOT of tears just under the surface this last five days, though they haven’t fully manifested themselves. I’ve been trying my hardest to not judge it but it does take me back to that time two years ago when I could barely make it through a day without bawling my eyes out. Back then I would get so angry with myself, and give myself all kinds of grief about how useless and pathetic I was. This time though, with the focus on ahimsa, I’ve largely been able to intercept such painful thoughts and replace them with a favourite mantra of mine:

Not only has this allowed me to address the knee-jerk cruel and harmful self-talk, but it’s also created a bit of space within which I can remember that the goal of what I’m doing here is to make gradual improvements in the practice of ahimsa, rather than achieving immediate perfection!

From my first ‘not to do’ we come to my first ‘to do’, and the niyama for week one which was sauca. Usually translated as purity and/or cleanliness, it’s pretty easy to make an immediate association between this and the idea of keeping a clean body but it’s not really limited in this way, instead extending to having a clean mind and surroundings too.

Sauca is about being clean both inside and out – removing impurities, and supporting the proper functioning of our bodies and minds, so that we can truly benefit from the rest of our yoga practice and allow our prana (energy) to freely flow. A great analogy that I’m unable to source right now is that of cleaning a window – so that the light (aka the Self) can shine through.

But clean doesn’t always mean cleansed of course and there’s also a thread of sauca that’s about finding clarity of mind. In other words acting from a place of truth rather than fear, and not dwelling on transient feelings but digging beneath them to uncover your more permanent Self.

Coincidentally as I started this experiment I also began reading another of our book list, the Hatha Yoga Pradipika. This text (as you may know if you too are on this yogic path) details many different ways of cleansing yourself in the name of yoga, from the fairly mainstream practice of jala neti to the more extreme practice (amongst others) of vastra dhauti, aka swallowing and regurgitating 1-1.5 metres of cotton cloth in order to clean the stomach! Perhaps unsurprisingly, I decided that these weren’t for me at this stage of my journey, particularly when I only had five days to play with, and so instead I went about discovering some less extreme ways of achieving my goal…

First up – my surroundings. I set about cleaning my desk (and shredded a mound of unnecessary papers), my flat (deep cleaning the bathroom while I was at it) and, though it wasn’t really dirty, my yoga mat too.

I did the (enormous!) pile of ironing that’s been haunting me for weeks and I also had a sort through the overflowing box of dried herbs and spices that sits on top of the kitchen cupboard – getting rid of what was no longer fit for use so that the next time I go to use it its various contents won’t come plummeting down on top of my head…

Now none of this, it’s worth pointing out, was about creating any kind of pristine, almost untouchable environment. Particularly given that (for me at least) that level of cleanliness brings a mania that bears no resemblance to sauca at all! Instead the point of it all was enabling me to function in life with ease and efficiency, the by-product of which is quite naturally an increased clarity of mind.

Moving on to the body, I drank more water and backed off the coffee, moving instead to herbal tea. It was a gradual change I’ll admit but over the week I’ve drunk less and less of the black stuff (no milk in my coffee!) and more and more of my teas, reminding myself along the way of how I enjoy them.

Also, off the back of a conversation with a colleague, I began to start my day with a cup of hot water and lemon and, on top of this, put my eating habits back on track too – backing off from the gluten that had been creeping in, and cutting down the late night chocolate binges! Plus, instead of the usual comfort food when I was tired, I turned to more nutritious meals that actually helped nourish me and (thanks to some support from a fellow teacher trainee) I’m starting to build more protein into my diet – a task that is long overdue.

The truth is that although it’s been some effort, I do feel better for it, not just in my body but in my mind too. Which segues quite neatly…

Because in applying the principles of sauca to my mental habits, I furthered this feeling and created space in my mind where previously there was just noise. I prioritised better at work, not over-scheduling my task list for the day and starting to single- (rather than multi-) task; I put down my phone when I got home at night; and I didn’t automatically switch on the radio when I walked in through the front door. In my asana, I really tried hard to step onto the mat and practice just being there, in that moment, with whatever would arise.

Essentially I put myself (my Self?) back in control, and consciously created space to just ‘be’. Which meant that not only did I get a lot more done, but I also became more me.

So what have I learnt? 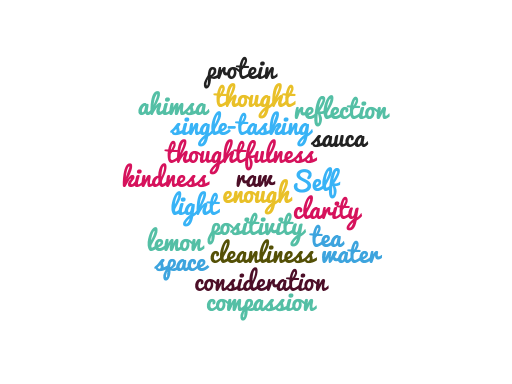 I’ve learnt that ahimsa and sauca overlap – both require a certain level of self-acceptance and love, and not just of the capital ‘S’ Self but of the little ‘s’ self as well. Clearly being pure of mind and intention can also mean being considerate and non-violent, just as being considered in what you eat also promotes purity of the body. I suspect that I’ll find this kind of overlap in many of these yamas/niyamas but time of course will tell.

I’ve learnt that with practice you really can find pause to reflect on your thoughts before acting upon them.

I’ve learnt that in delving into all of this I’m baring a little more of my soul to the world. This can be disorientating and even somewhat painful, but it probably explains why that last ‘Seen on Instagram’ post resonated so much with me!

And finally, I’ve learnt that the practice of these rules is going to be a life-long task and, though my focus for the next week will move on, I won’t really be leaving these two behind.

(PS – this post is now longer than my essay can be…I’m going to need some help!)

Other posts in the series:
#2 – satya and samtosa
#3 – asteya and tapas
#4 –brahmacarya and svadhyaya
#5 – aparigraha and isvarapranidhana